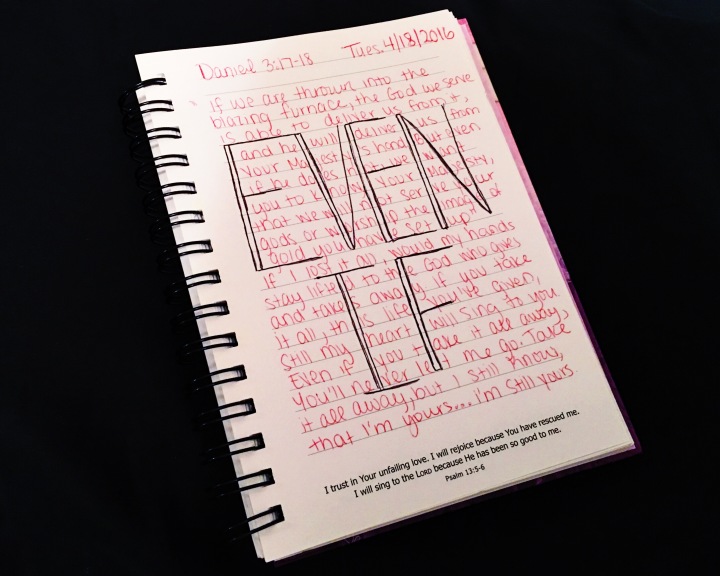 Daniel 3 tells the story of Shadrach, Meshach, and Abednego and their faithfulness to God. At that time, King Nebuchadnezzar made an image of gold and ordered all the people to fall down and worship this image. Shadrach, Meshach and Abednego refused to worship the image and the king decided to throw them into a blazing furnace.

“Shadrach, Meshach and Abednego replied to him, “King Nebuchadnezzar, we do not need to defend ourselves before you in this matter. If we are thrown into the blazing furnace, the God we serve is able to deliver us from it, and he will deliver us from Your Majesty’s hand. But even if he does not, we want you to know, Your Majesty, that we will not serve your gods or worship the image of gold you have set up.”

“He will deliver us from your majesty’s hand. But even if he does not…” You see, Shadrach, Meshach, and Abednego had faith that God could and would deliver them from the situation they were facing, but stated that even if He didn’t, they would still only worship Him.

What situation are you facing? God can and will deliver you, but even if it seems impossible, will you praise Him?

Even if everything was taken away and you were left with nothing, would you worship Him?

So how does the story end? Shadrach, Meshach and Abednego were indeed thrown into the blazing furnace. Verse 22 says that the flames were so hot that the fire even killed the soldiers who were putting the men up.

Three men were thrown into the fire, but when the king looked, he saw four men walking around (one looking like a “son of the gods”). Shadrach, Meshach and Abednego then were called out of the fire and walked out with no burns, singes, or any evidence that they had been in a fire at all.

God is faithful. He delivered these men and he will deliver you.

But EVEN IF nothing goes the way you think it should, will you still sing His praise?

Please listen to the song “I’m Still Yours” by Kutless. Link below…